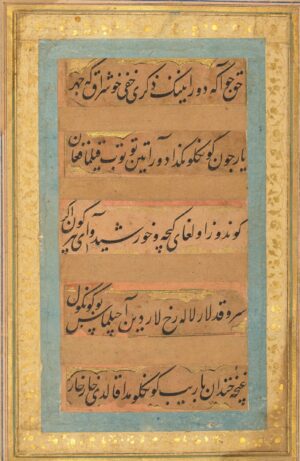 Chaghatay is the name given to the now extinct language that can be regarded as the antecedent of both the modern Uyghur and Uzbek languages. Broadly speaking, Chaghatay is the form of Eastern Turkic that existed in various stage from the 1400s all the way up to the early 20th century. It was so named by scholars because it is associated with the area ruled by Chinggis Khan’s son Chaghatay (ruled 1226-1242).

Chaghatay is important for understanding the history and evolution of Eastern Turkic and, since there are many extant Chaghatay texts and manuscripts, for Central Asian studies. Eric Schluessel has written a very good post on this here.

Here are some resources to get you started in the Chaghatay language.

An Introduction to Chaghatay: A Graded Textbook for Reading Central Asian Sources
by Eric Schluessel

This textbook which came out only in 2018 is certainly one of the best places to start. It is the first graded textbook on Chaghatay to appear in the English language since the early twentieth century!
You can download a free pdf copy from Maize Books here, or purchase a printed copy from your favourite online bookstore.
2. TECHNICAL TEXTS
Much more hardcore but less accessible are the following two highly technical books on Chaghatay language. Print copies are hard to come by but it is possible to find electronic copies by searching online.
Chagatay Manual
by János Eckman
(Uralic and Altaic Studies Volume 60)
Mouton and Co., 1966.
A Grammar of Chaghatay
by András Bodrogligeti
Lincom Europa, 2001.